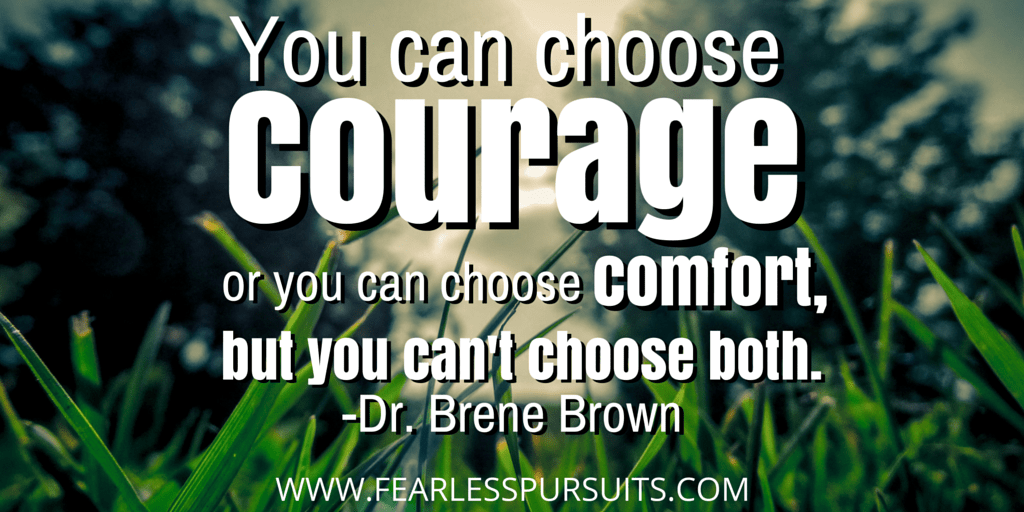 How can you be yourself when you’re surrounded by people who demean you for the very things that make you… you? How can you lead a happy life when you feel like you’re hiding yourself from everyone in plain sight?

Don’t have the time to read through this post? Kick back and listen to the audio version by clicking the arrow below.

Even if you don’t have a lot of negative people in your own personal circle, you have likely noticed some unrealistic expectations and limiting beliefs have been placed on your gender, your physique, or even the career you want to pursue.

To start with, I’d like to share a recent video with you on the topic. In it, I’ll share some motivation and inspiration for you to be true to yourself.

Having the courage to be yourself is the only way you’ll ever live a satisfying, joyful life.

Whether it’s your family, your in-laws, your toxic coworkers, or even just a magazine cover – the critics are everywhere.

The sheer amount of critics in the world should be a sure enough sign for most of us to say “screw it”, and stop aiming to please everybody… But why do we still do it anyway?

Being yourself is one of the most important steps to having more passion for life. Yet, it’s one of the basic human needs most commonly neglected. The reason for this is nearly universal. It’s that same darn word we’re always talking about here: Fear.

Fear of what, exactly? First and foremost, it’s the fear of rejection. So many of us are afraid to be our authentic selves around other people, because we’re certain that they will be so revolted by our quirks that they may not accept them.

Wait, what? Whatever happened to that badass ‘screw it’ attitude? Well, the reason we couldn’t possibly act like that is because we’ll surely be all alone by the time our strangeness has driven everyone off that we care about. Or… so we think.

Wow. It’s pretty clear that the brain can naturally have a deeply depressing and cynical imagination if we allow it to. It’s this sort of imagination that we need to get control over, because it’s not going to get you an inch farther in your life.

Besides that, it’s just simply not true. As of 2013, it’s been calculated that we have a whopping total of at least 7.125 billion people on this planet. By now, it’s likely grown exponentially since then.

Think about it. That’s a LOT of people. 316.5 million of them – and counting – are in the US alone. To never be able to find a single soul to accept you for you, rather than some mask you wear to impress them… that just doesn’t seem possible!

You may be thinking to yourself, “Well, that’s great and all, but I still don’t know how to have the courage to be myself around anyone else but me. I’ve never done it before.”

That’s perfectly understandable! Freely being you can be made into a habit just the same way as any other habit. It’s just felt easier and safer for us to only be our true selves when we’re alone.

That way, we don’t have to worry whether or not people will accept us; they already do, and we want to feel certain that it will stay that way. Certainty is one of our basic human needs, and it’s something that we all naturally seek. Feeling certain is comfortable.

It’s time to let go of what’s comfortable and start living our lives with our own happiness in mind.

Any temporary fear or discomfort from changing your behavior will be well worth being able to express yourself freely around those who care about you. There should be no need for “coming out” as anything.

“Honey, I’ve been wanting to say this for a while now, but I could never find the right time. I–“
She turns her head away to glance at her feet. Suspenseful music plays in the background. Our view pans toward her boyfriend for a moment. His grave expression shows that he’s prepared for a devastating revelation.

He firmly clutches her delicate, shaking hands in his.
She breathes a sigh, and brushes the loose locks of hair from her face. Slowly, she looks up at him and says, “I like to dance in my underwear and socks when you’re gone.”

Really? More likely than not, this is not a scenario that would happen in the real world, nor should it be. Whether you’re with your spouse or with a friend, your friendship should be founded on both of you being fully authentic. You should have little to hide when you’re around friends, especially nothing that makes you happy. Even the silly stuff.

Anyone who stays with you after seeing who you truly are is exactly who you want to keep in your life. Rather than as a deterrent for potential friends, learn to think of your quirks as a filter for bringing only the most compatible relationships to you, and weeding out the rest.

Giving a new meaning to the thoughts that you dread is the only way you can ever learn to conquer them. You need to change the meaning of other people who don’t fully embrace what makes you who you are. We all look at this and think of it as one thing only: Rejection.

It’s easier to be yourself when you realize the hard truth about rejection: “It’s not you, it’s me”

You CAN change the meaning of rejection and the weight you allow it to have on your mind.

First, understanding why it happens can help. More often than not, it’s about them – not you.

They could be judging themselves for their own inability to be authentic. I was once ridiculed by a friend for being able to dance, laugh, and chat freely at a restaurant bar without having more than a few sips of alcohol.

Confused by her blunt criticism and bad attitude, I asked her if something was wrong. This was so out of character for her! Throughout the night, I continued to feel worse and worse about it.

It had nothing to do with me at all, I soon found out. She confided in me that she simply just wished she could be the same way. She was judging herself for something that I could do that she felt incapable of.

It shouldn’t surprise you to find out that she has made no effort to stay in touch with me since that night. I could have easily let my imagination run wild, and believed that I’d done something to deserve the way she treated me. Thankfully, however, she was honest with me before that could happen. I was lucky.

The fear of rejection is also consistent in the world of dating. I have talked with clients that were afraid to ask someone out on a date. When asked why, the answer was almost universally the same: they were afraid of rejection because they were judging themselves in some way. As long as someone has a limiting belief like any of these, they will sabotage themselves. They find themselves alone until they finally make peace with their beliefs on their own – IF they ever do. Settling for someone who is not everything that they want and need is another common result.

It’s so common to do this with our friend circle, and we do it just as much when we date. We have to end the vicious cycle before it starts.

Rejection is the ultimate tool for finding a best friend.

Being “rejected” saves you the trouble of finding out later that they’re not an open-minded or accepting individual. Everyone always shows their true colors with time, but it’s easier to know now.

Find out before they’ve already become a significant part of your life. It’s the easiest way to end a toxic relationship before it starts.

I dare you, Fearless reader:
Ask yourself… “what’s the worst thing that can happen if they don’t like me?” There’s plenty of other people out there who just might. The only way to find who you really belong with is to keep being you.