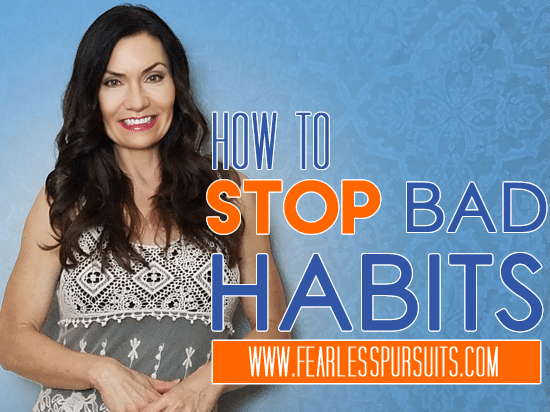 Want to know how to stop bad habits? In this article, I’m going to explain some ways to get rid of bad habits.

If you’d like the short n’ sweet version, check out this video!

First, start with a list. Make peace with the fact that, while these habits are very real, they are what you’ve PRACTICED being and not who you are. List all of your bad habits, and prioritize which ones you’d really like to get rid of most.

When you’ve prioritized your bad habits, then you can determine how much time and effort to devote to quitting or replacing each. You may have to put some on the backburner while you focus on another.

Make a commitment in the form of a personal constitution. Write it in a journal or on a sheet of paper. Commit to getting rid of the habit and say WHY you are. Make it matter!

One of the easiest ways to stay committed to quitting a bad habit or replacing it is to have some skin in the game. You can create a jar to place money in each time you catch yourself doing that habit again.

(Name the jar whatever feels appropriate but still positive to you. The last thing you want to call this is ‘punishment’, because then you won’t want to do it.)

Seeing the visual representation of the money stacking up is powerful for putting into perspective how often you do it. Money is also a HUGE motivator for humans. Even when used metaphorically!

When you find that the money stopped stacking up, celebrate curing your habit by spending it on a reward or donating it to your favorite cause!

It’s often been said that the best ways to stop bad habits is to replace them with something. To effectively replace a bad habit, we have to determine the triggering feeling. Sometimes, it’s even an environment that makes us react with the bad habit.

I used to drink wine quite a bit more regularly than I do now. Wanting to cut down on it, I realized that I was always doing it at the same time every day. I got in touch with exactly what I was feeling at that time.

It was always whenever I got back from the gym at around 6:00 at night. By that time, work was finished, I was done helping my daughter with school, and I was tired from my workout. This left me in the mood to party and relax!

How to stop bad habits… at the source!

To compensate for the feeling I was trying to get from the wine, I changed my behavior. I went for turning up some loud favorite music instead. I’ll dance with my youngest daughter, or offer to play a board game with either one of my daughters.

Seems like a good time to me… wine or not!

People will often eat emotionally when they’re seeking love, and this is so important to understand. Knowing the underlying need that you may be trying to fulfill from a behavior is a good start for getting rid of it. A good way to replace that would be to make some personal connections through a group or a hobby class.

Biting nails usually starts as a nervous habit. Sometimes that’s all it ever is. For some, they become so comfortable in it that they even find themselves doing it when they’re just plain bored.

Pay attention to moments when you feel like biting your nails. Find something else to occupy your hands and your mind that’s more productive. Chewing gum works for some people, but if you’re health-conscious like me, you may not want the extra sugar. 😉

Is there is a mood, environment, or person that influences you to do this bad habit? Focus on ways to eliminate that as much as possible. You can kill a habit at the source this way!

Sometimes we struggle to stay consistent because it’s difficult and we lack support. Like an alcoholic would seek companions through AA, you should connect with a friend or family member on a similar journey to quit a bad habit, so that you can keep each other accountable.

Do you have any more tips on how to stop bad habits? If you found something that has worked well for you, feel free to leave it in the comments below.