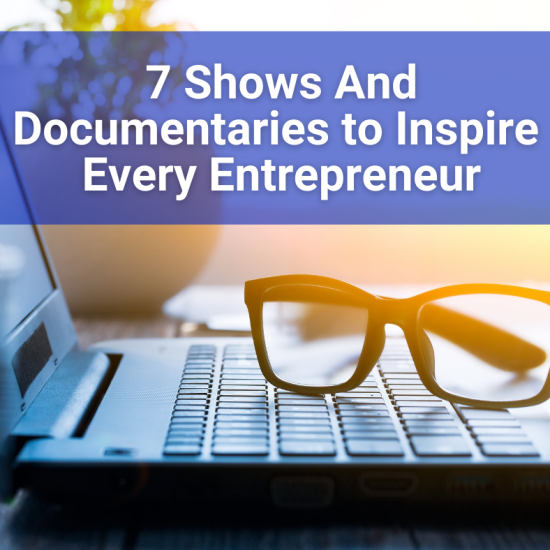 As your online business coach, inspiration and motivation play a major role in our creativity and hitting our goals. It's not surprising that it's just as important to see other entrepreneurs succeeding AND failing. If you’re trying to get ahead in today’s business world, few things besides an MBA and personal connections can help pave your road to success better than the right viewing programming to sharpen your mind and inspire your creativity for the entrepreneurial adventure ahead of you.

We’ve compiled a list of 7 streaming shows and documentaries providing just that. This popular program is formatted like a competition, in which both investors and entrepreneurs are in their own separate but connected competitions. Each episode contains several segments. In each segment, an entrepreneur (or pair or team of them) pitches their product to a panel of five individual investors, closing with a request for a specific amount of funds in exchange for a specific percentage ownership in the business. The investors then ask questions, examine or, in cases, even sample the product, and either accept, reject, or counter the offer. In the end, the entrepreneur either makes a deal or doesn’t. It’s all very exciting, especially when the investors turn on each other and the horns come out, although sometimes they join forces and it’s all warm fuzzies. What better way to inspire yourself to reach for the gold, go for the gusto and build your dreams than to study the mind of one of the great men who did it all: the creator of Microsoft and the ubiquitous brand associated with one of the products most widely used and relied upon of them all around the world. This TV show is actually a three-part docuseries that studies Gates from his childhood days to his genius in the making. It contains interviews interspersed with candid and biographical material alike, revealing his wit, positivity and drive. How I Made My Millions

This spin-off of CNBC’s also-popular business reality show The Profit lets you watch ordinary people telling the stories of their extraordinary successes, showing viewers like you just how you can write your own success stories too. If there’s one program that aims to put the American Dream on full display, it’s this one. Sometimes, you’ve got to learn how to do it wrong in order to learn how to do it right. This documentary is sure to teach you everything you need to know to fail in business and wind yourself up in a striped jumpsuit behind bars. (Do they still wear striped jumpsuits in prison?) The great minds who ran Enron into the ground were widely thought to be some of the greatest, until they were found to be some of the greediest and most sinister. Watch this cautionary tale to learn why the key to success in business is all about serving the customer, not your own ego or bank account. Ultimately, it will hopefully inspire the do-gooder in you to go out and do better than these guys did. Where so many popular and successful documentaries about business and entrepreneurship (Food Inc., Hot Girls Wanted, Roger & Me, We Live in Public, The Insider, Inside Job, The Corporation) reveal the dark underbelly of that world, this rare Japanese-language American gem follows an 85-year-old owner of a modest and humble sushi restaurant in a Tokyo subway station. A sushi-only establishment serving only 20 courses, the film chronicles the sushi master's two sons, one who aims to mirror his father’s success in the niche in his own small corner of the market and the other to succeed his father in that same spot. Perhaps the singular most pressing problem on all entrepreneurs’ minds is how to raise the funding needed to start and run their businesses. Typically, this involves business loans and investors.

This documentary reveals that there are actually, thankfully, other ways, all flying mostly under the banner of crowdsourcing. With a little ingenuity and a lot of drive, this film reveals many different examples of the lesser-known successes of others, and how this new tool for raising needed capital can help you too to start and grow your own business without giving away your profits or business ownership shares in advance.

With these 7 business shows and documentaries under your cap, you’ll be on your way to start out your adventures in entrepreneurship.