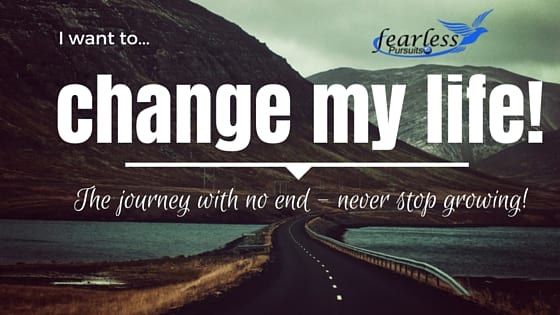 We hear people say it all of the time…”I want to change my life.” They are so believable that you actually expect them to succeed. Yet, many people, even as energized and motivated as they seem… just don’t change.

You’ll know what I mean, because I’m certain that you have witnessed this same sad story with someone in your own life at least once. Maybe you’ve even seen this happening for yourself.

Of course you would expect some form of change to take place, right? Maybe you’ve read a book that inspired you, or perhaps you’ve gone to a motivational seminar. Maybe you simply saw a movie that resonated with you on a deep level, or maybe it was just so black and white for you that, one day, you finally put your foot down and decide that you were done with living that way.

Whatever the circumstances may be, there was a time where you truly believed that you’d reached your limit. With confidence and indignance in your voice, you said to yourself, maybe even aloud to the world – “I want to change my life!”

We’ve all been there; an event happens that makes us really reflect about the direction of our life, and we become shaken by it somehow. These events can motivate us in a positive way or a negative way but either way, we are moved to take action.

Let’s talk for a second about being inspired and being motivated to change your life, and what the benefits of those two powerful things are. While these two words hold a lot of power in them, and we know that they ARE important to have, they are not actually all you need to succeed.

If you’ve relied solely on motivation, inspiration, or a combination of both to advance in your life, and you see that you’re not succeeding… it’s because there’s a few key pieces missing.

Before I delve into what those key pieces are, allow me to start with some brief stories. I love stories, because they make great examples that are easier to visualize and relate with.

I had a client who was inspired to get on stage and become a physique competitor. It was her dream to be among those chiseled bronze amazon warriors who stand on stage, competing against each other to determine who can best combine carefully planned posing, a confident strut, and, above all else – to determine who dieted and trained well enough to build those curvy muscles.

Here she was on the sidelines, admiring the beauty of these physique competitors, and envisioning herself on stage just like them. She began her journey by feverishly researching, and learning about what goes into this sort of thing.

She truly believed she was going to do it! She even fueled her burning passion with more inspiration as she watched herself shed fat and start to look great! Then, just as the date of the next competition was approaching… something strange happened. She started to doubt herself.

All sorts of internal talk in her head about why she wasn’t as good as the other competitors. She began to fear that she may not have enough time to achieve that goddess she saw in her mind, even though she was well on her way.

When she saw the guest list, an overwhelming rush of stage fright suddenly overcame her, and she questioned her own sanity for daring to compete against the experts. Before she knew it, she was out. She stopped even trying at all.

What about the husband who just wants to see a smile on his wife’s face, only to see that no matter what he did, he could not make her happy? He was inspired one evening when he and his wife went out one evening, as he watched another couple nearby.

As they were together, he noticed a stark difference between that couple and his own relationship. He became inspired to be like them. You see, he saw that they were kissing, touching, and laughing. They seemed to be so madly in love!

A burning desire for the very same thing erupted inside of him. He didn’t know the first thing to do because his relationship with his wife had become stale. With that, he said in his mind…”I want to change my life.”

Nonetheless, he was motivated, and he started talking to his wife about being happy, but as his desire to make the relationship better was met with the same hum-drum response as any other of his efforts… soon, he’d lost hope and gave up.

“I want to change my life” – Motivation and Inspiration don’t work.

What happened here? These two clients were so fired up to change! It was so obvious that they wanted to. They each had a desire, each had their reasons to change, but yet each of them failed!

Or, rather than saying they tried… do we say that they experimented and didn’t push on to success? I vote…that they didn’t push on. What is really needed to change?

I want to change my life but I need something actionable.

Yes you do. This comes out of learning new habits. We as humans are addicted. There’s no mistake. We get stuck in our ways, all of us do. It’s part of being human so don’t be upset with yourself if you have been struggling to change but haven’t had success yet.

In the next part of “I want to change my life” blog post series, I will go into more actionable behaviors that you can put into use to make long lasting positive change. Please share this post to get the word out so everyone can improve and make a better life. Go out and be fearless!