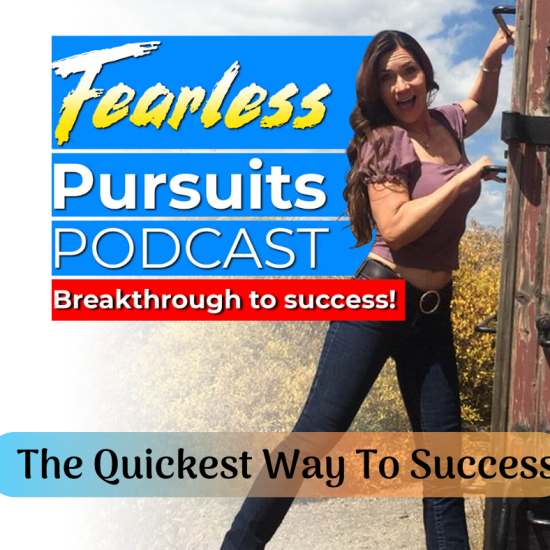 You want success in your life and business don't you? You're tired of struggling and you're ready for content that excites and educates you, motivates and inspires you. Sit back and listen as we bust through what is keeping you from playing BIGGER in your life and business with knowledge, strategies and empowerment so you can fearlessly pursue your dreams...like your life depends on it!

So! I know you want more success. You want more money, more freedom, maybe better fitness or health. Maybe you want better relationships. Here’s the thing, you CAN have anything you want, you just have to know HOW to achieve a level of success that fulfills you. That’s why I’m talking with you today about how to find the fastest way to achieve success.

You want to know the quickest way to succeed, right?

Yeah, I thought you’d be interested. And what I’m about to share with you may surprise you but  I think some of you may know this already. There is no such thing as the quickest way to succeed. Right? Let me add… anyone that tries to tell you otherwise is basically trying to sell you a load of BS.

Is there REALLY a quick way to success?

Here this loud and clear. There is no quick way to succeed BUT… I WILL be sharing with you HOW you can succeed in your business.

Listen, anyone that’s achieved anything that big in their lives or in their business will tell you it’s really just a few basic aspects that you have to master.

The second thing is sacrifice… or paying the price. The third thing is, a growth mindset.

Okay, so let’s dive into each of these aspects to see if you’ve got what it takes to grow a thriving successful business.

Let’s start with the first thing, consistency.  Now let’s use me as an example here. I’ve been podcasting now for almost a year now.  Okay, my goal is to produce one podcast every thursday and gain as many subscribers as possible. What’s it going to take? Am I going to get overnight success? Am I going  to wake up one day and have a million subscribers? No. Is the answer, and you know that don’t you? You know what it’s going to take…consistency. Right?

Consistency is a key component to success in ANYTHING in life or business.

What do I have to do? I have to show up regularly… publishing podcasts regularly, letting you know that I’m serious, that I’m not a one hit wonder. I am here to give value as often as I possibly can. See what I have to do, is to demonstrate to you that I’m going to be here, right? You don’t want to follow someone that’s there and then not.

I’ve got to be consistent.

Another thing I have to do is pay the price. That’s right, just like you in whatever you’re working on. I’ve got to pay the price. So, that sacrifice will be different for each of us depending on the goal but let’s look at the price. Again, looking at me for example. What is the sacrifice that I’ll have to pay?

Well, there’s a lot of things that I’ve got to learn about. I need to learn how you market my podcast. The best way to get subscribers.  I’ve got to give this some time, I can’t give up. I’ve got to come up with content.

Let’s talk about each one and a little bit more.

Are you constantly looking for the, “silver bullet”?

I know we want to think there’s a quick way, right? … a silver bullet and easy way. Marketers love to use language because oh boy… wouldn’t it be fantastic if there was just a silver bullet? Right. I know you know the truth, and  I’m not going to insult your intelligence, but sometimes we are fooled, or tricked by some pretty slick advertisement. But guess what, it’s about consistency. How many times do you find yourself stopping short of the finishing line. I know I have, I definitely know that I have.

Listen, I’ve never come across anyone that’s from one single act. Not a politician, a business owner or a millionaire… a billionaire. You see, it’s never for one single act. Right? We like to think so but we know it’s not the case, it comes down to daily habit. They make it all look so easy don’t they. Well that’s misleading.

Success happens, one step at a time.

It always comes down to daily habit whether you write a book or if you want to get fit or maybe you want to get healthy. It doesn’t matter, it comes down to daily habit. Listen, Anyone can do something, one or two times. In fact, when you set a goal, often there’s a lot of energy around it in the beginning, right?  You’re all excited about it, so it’s easy to do the first day, the second day, maybe the third day, but by the time we get to the fourth day.

What’s your energy around the goals that you have?

…The fifth day. Coming up, and then it’s easy to quit. Right? We see people doing this in so many aspects of their lives.

And you’ve seen this in your own life or someone close to you. It’s really the truth. As you know I got down to 10% body fat when I won first place in a bodybuilding competition.

At first, when I set the goal, I was really excited about it, but it wasn’t long before it became hard to motivate myself to keep dieting or getting to the gym. You know… five or six days a week and let me tell you, with all the aches, it just wasn’t fun but if I was truly committed to the success of my goal then I needed consistency, right?

And let me just give you just a little technique on this I found really useful as do some of my clients. To motivate yourself, you can use a calendar . You just put an X on the calendar representing this goal. So all becomes about getting the x’s.

Now here’s what I know, you fill in Monday, you’ll fill in Tuesday. That part isn’t hard. So you see, you don’t want to miss Wednesday. Oh, that’d let you down, wouldn’t it? You’re on a winning streak now, right?

Are you REALLY ready to pay the price for success?

Many people seek success, that’s just a fact. Many many many people succeed. Here’s the bad news… very few people are willing to pay the price for that success.

What do you have to do? You’ve got to pay the price. Paying the price is about investing in the long term success, which might be you’ve got to take a short term sacrifice. And that’s really what it means. But we live in a fast food society. We all want the quick fix, we all want the easy way. But we also know that anything of value, anything that’s really meaningful is never easy. Right. It’s not easy.

So, whatever lifestyle goals we want, there is always a sacrifice. Doesn’t matter what it is…  it might be putting in many many hours. The price might be, unlearning negative beliefs, the price might be becoming emotionally mature, being able to deal with jealousy being able to deal with fear of failure… you know… You might have to eliminate negative emotions, anger, resentment.

If you want something bad enough, you have to do what it takes. It might be that you’ve got to give up blaming and finger pointing and complaining and whining and being the drama queen, right?

These are some of the things that you might have to give up, pay the price of, in order to be successful. And the list goes on and on and on. Right. And that’s just some of the basics. But here’s the thing. What’s the price of failure?

We’ve talked about failure. There’s a price to pay for failure and it’s not gonna make you feel good.

Failure is more painful to eperience than success!

The third aspect is mindset. We have to be really honest with ourselves. There’s a lot of issues that involve self doubt, confidence and fear. I hear it on the daily. This is after all why I named my business Fearless pursuits. I’ve seen this for decades in my friends, family and of course in myself.

In order to be more successful in our business, we have to be honest with ourselves. Also, we’ll have to step back and look at your business with a critical eye. That’s not always easy to do when your mindset might be the cause of your lack of success.

There’s a lot of talk about using affirmations to help your subconscious mind and there IS a place for it BUT, I hate to be the bearer of bad news, this might be getting you nowhere fast.

Sure, we need to work on our mindset, it’s definitely a key component to getting what you want and having more success.

Do you have the mindset of a successful entrepreneur?

More than mindset though, you need to do what I call… “belief work”. What we have to do if we want more success in ANYTHING, is to step into the identity of the person you want to be. Aside from that, you must actually believe that you are already there.

That’s not an easy thing to do when your bank account doesn’t resemble what you want.

You see this is where most people get it wrong.

You’ve got it backwards if you think strategy is a primary component of success… it’s mindset!

Most people are doing affirmations and trying to “convince” themselves that they already are that person or make themselves feel good. But they don’t actually believe it, because their daily thoughts, actions and feelings do not support that.

The only thing that will bring you closer to being that person, is to do, think, and act like that person would.

Would someone who was already making $XX dollars per month or year, be thinking like you do, making the decisions you are currently making, or worrying and stressing about money the way you do? Probably not?

Your self image is a driving force for success!

Would a high level, thought leader be hiding their gifts, afraid to show up, or have negative feelings around selling something that can change people’s lives? Probably not.

Would someone with an amazing, healthy, fit body be engaging in negative self talk, eating chips or donuts on the couch or stopping at the fast food drive in? Probably not.

Start to embody the person that you want to be… NOW!

Affirmations are nice, but when you can step into identity and embody that which you most desire… well, that’s when the real magic happens.

It’s all a mindset. The mindset of an entrepreneur is a self image that is unshakeable and continues to grow.

Alright, I loved this topic so much and I hope you did as much. I hope you take something away from this podcast and apply it in your life or your business and reach a level of success that you’re proud of. I want you to win but you’ve gotta go out and be consistent, make some sacrifices and most of all design a bullet proof self image and mindset that makes serious impact and abundance.